Sleuthing, With a Little Help From My Friends

I don’t usually think of myself as a detective. I tell folks that we at the Aquatic Animal Health Program investigate fish kills for the New York State Department of Environmental Conservation (DEC). However, after recently being labeled a sleuth during Cornell Wildlife Health Center rounds, I looked up the definition. We certainly search for clues, conduct inquiries, and track suspects.

This past year, the invasive round goby was our fishy suspect. The crime we were investigating was an outbreak of the deadly disease, viral hemorrhagic septicemia (VHS). Round goby like these pictured here were dying with clinical signs of VHS.

The May 2017 incident occurred on the eastern shore of Cayuga Lake. Samples were collected, fish were necropsied, and rapid molecular tests quickly showed this dangerous rhabdovirus had entered our backyard. VHS threatens many of our top game fish throughout the Great Lakes. Here is a montage of 28 of the documented fish species susceptible to VHS. There is a reason the round goby is placed in the middle of these photos. Gobies have played a role in many of the VHS outbreaks since 2005. 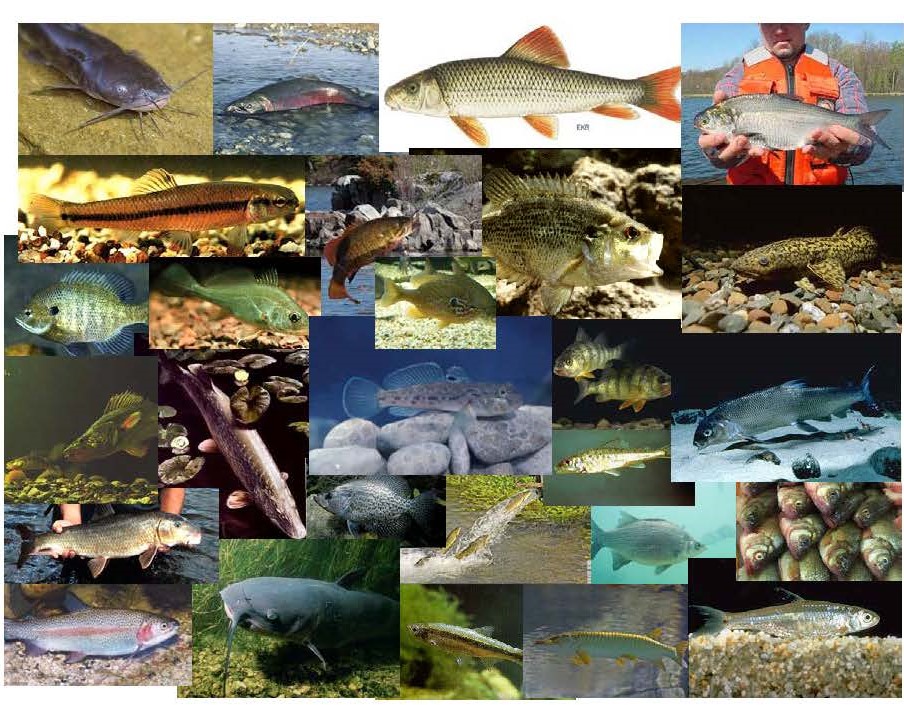 The sleuthing began with the assistance of our AQUAVET® Summer Research Fellow, Erika First. She prepared the initial cDNA from several of the infected goby tissues from Cayuga Lake, as well as samples from the potential sources of the VHS virus (see map). Our hypothesis was the “suspects” had carried this virus with them using the Erie Canal “superhighway” to slowly make their way from either Lake Erie or Lake Ontario. Our fisheries detectives at Cornell and from the DEC and US Fish and Wildlife Service have tracked the goby movements throughout New York State. The red dots on the map show citizen science detection of round gobies from eDNA in water samples. 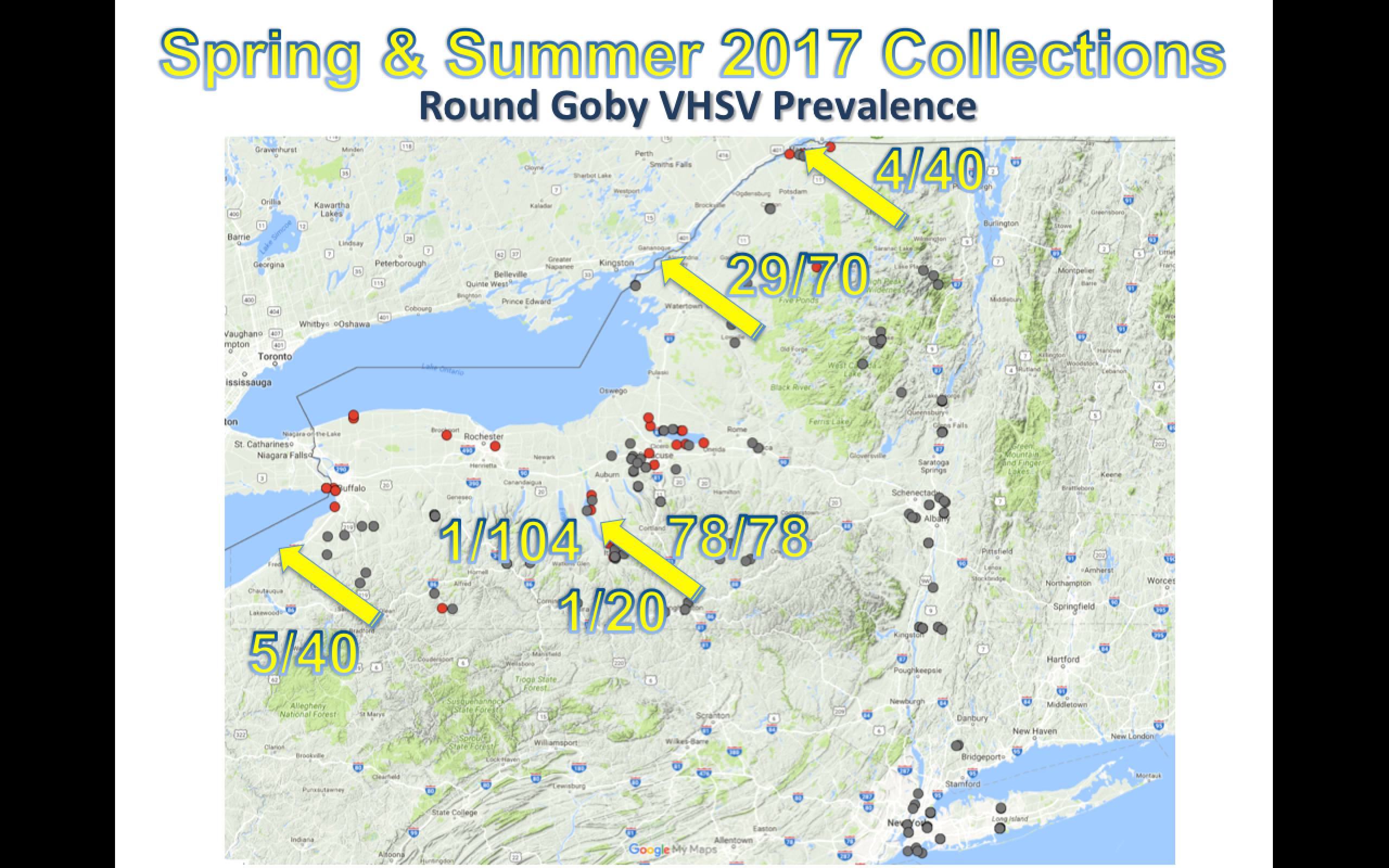 With the help of two more friends down campus at Ecology and Evolutionary Biology, Jose Andres and Steve Bogdanowicz, we sequenced fifteen VHSV isolates and explored their genetic variation to determine the likely source of the May 2017 VHSV outbreak. The phylogenetic tree created with aligned viral sequences from the VHSV outbreak site and other New York locations appears to show the Cayuga Lake isolates were most closely related to the Lake Erie isolates. 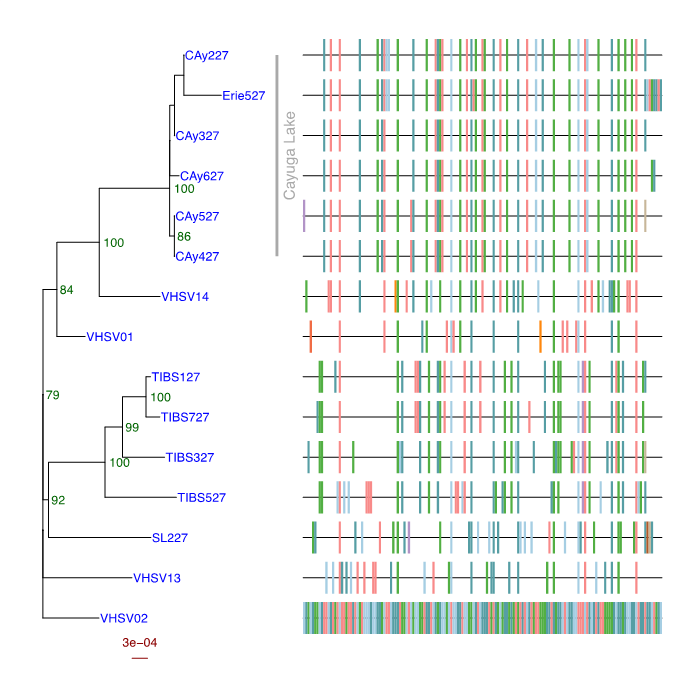 Our final question for the round goby suspects was, “Did they have help from any of their human friends or did they swim all the way from Lake Erie all on their own?” The near “fingerprint-like" match of Cayuga Lake viral sequences with the Lake Erie virus along with the documented movements of round gobies in the canal system over several generations fails to point the finger at any accomplices. Let’s hope they do not infect too many of their fellow fish.

Chasing Chickens in Kenya: Linking Poultry Health and Harmful Algal Blooms
Wildlife as a Window to Environmental Pollution in the Galápagos
The Buzz on Bee Toxicology
Learning the Importance of Veterinary Medicine and Conservation in the Republic of Congo
One Word: Nurdles
END_OF_DOCUMENT_TOKEN_TO_BE_REPLACED