Vector-borne infectious diseases pose substantial threats to human health and the conservation of wildlife. Avian malaria in Hawai‘i provides an example of the devastation caused by the emergence and spread of such diseases within susceptible host populations.

In Hawai‘i, avian malaria is caused by Plasmodium relictum and is transmitted by the invasive southern house mosquito, Culex quinquefasciatus. While the negative consequences of avian malaria in most introduced host species are subtle and difficult to detect, avian malaria causes high rates of mortality in susceptible Hawaiian honeycreeper species (1). A substantial body of experimental, observational, and modeling work focused on avian malaria dynamics and infection pathology in Hawai‘i (1,2) suggests that avian malaria is the primary driver of species extinctions and population extirpations of native birds in Hawai‘i. The grim problem has been well defined and effective management solutions are desperately needed. Fortunately, the recent development of novel mosquito control technologies to suppress mosquito populations and reduce mosquito-borne disease transmission of human diseases like dengue and malaria may hold the key to solve Hawai‘i ’s avian conservation crisis.

The question of how to conserve native birds in the face of avian malaria has vexed wildlife biologists and conservationists in Hawai‘i for more than 80 years. Important earlier avian conservation efforts focused on acquiring and maintaining disease-free high-elevation native forests, including the establishment of Hakalau Forest National Wildlife Refuge, where cooler temperatures inhibit both mosquito and parasite growth (3,4). Yet climate change will undoubtedly reduce these thermal refugia, further straining susceptible native bird communities as suitable forest bird habitat is lost to climate-driven disease spread (5-7). Given that avian malaria risk to birds is driven primarily by exposure to a mosquito that depends on water for its immature development, localized avian malaria management efforts have sensibly focused on methods to reduce anthropogenic- or pig-created mosquito larval habitats or kill larvae or adults. Although a mainstay of human vector-borne disease control, these traditional mosquito control methods are difficult to employ across wet, topographically complex landscapes, where larval habitats are cryptic and patchily distributed over space and time. (See link below from the Kauai Forest Bird Recovery Project).

View a video of mosquito control efforts on Kauai

Other suggestions for disease management and bird conservation include approaches to increase survival and reproduction in birds to offset malaria-induced mortality, by reducing predation, for example. However, given the high rates of disease-induced mortality in Hawai‘i ’s threatened and endangered avifauna and the predicted timeline for the invasion of mosquitoes into ever higher reaches of native bird habitat, these efforts alone are likely to be insufficient. Disease management measures need to break the cycle of avian malaria transmission to prevent the imminent extinction of as many as 13 Hawaiian honeycreeper species endangered by avian malaria across the state.

Currently, a consortium of federal and state biologists, university faculty and researchers, and partners at the American Bird Conservancy (ABC) are spearheading efforts to put novel vector control techniques to work for vulnerable native bird populations in Hawai‘i. Based on consensus advice emerging from a meeting of biologists and public health and novel vector control experts in Hawai‘i in 2016, the group is working collaboratively to advance an incompatible insect technique (IIT) approach to locally suppress populations of Cx. quinquefasciatus. The objective is to achieve landscape-level mosquito suppression in forested habitats where vulnerable threatened and endangered native birds face increased risk of infection due to mosquitoes and, in some cases, the risk of species extinction. IIT harnesses the biological properties of Wolbachia, a naturally-occurring, non-genetically modified, endosymbiotic bacteria that acts as a birth control method for mosquitoes.

When Wolbachia-infected male mosquitoes mate with a female that is infected with a different, incompatible strain of Wolbachia, the resulting embryos are not viable. Colonies of incompatible Wolbachia-infected mosquitoes are reared in the lab, and males are carefully separated from females. By repeatedly releasing large numbers of incompatible males into a wild mosquito population, IIT causes the wild population to crash. An important advancement in this field is the ability to mechanically transfer novel Wolbachia strains into mosquito hosts in the lab—called transinfection—substantially increasing the incompatibility rate and thus the chances for success. An IIT approach has numerous benefits for use for conservation purposes. Releasing males pose no additional risk to birds because males do not bite or carry disease. The method is reversible in that if releases stop, the introduced Wolbachia strains will not persist in mosquito populations indefinitely. Field trial releases of Wolbachia-transinfected Aedes and Cx. quinquefasciatus in continental and oceanic island systems demonstrate the safety and effectiveness of these methods for human health (8,9). Implementing these methods for conservation purposes can also provide results and guidelines for future suppression of mosquitoes in Hawai‘i that pose human health concern, including Aedes albopictus, a known vector of at least 22 arboviruses that was implicated as the main vector in recent locally-transmitted dengue outbreaks in Hawai‘i.

Many diverse and equally important threads must come together for the successful implementation of landscape-level mosquito suppression for native bird conservation in Hawai‘i, including funding, permitting, complex planning and logistics, among others. One core principal of this work is that decisions are made using the best available science. Although an ITT approach has been successfully implemented in more urban areas, the urgent need for vector control for conservation application is in remote, natural, forested areas across the state where low densities of mosquitoes fuel seasonal outbreaks in mid- to upper elevation forests, introducing unique challenges to vector control. Modelling approaches have been used extensively to guide the implementation of other novel vector control programs, and are currently being developed to explore alternate implementation strategies. These models provide a way to optimize implementation scenarios and identify important gaps and uncertainties prior to actual interventions. The group is working together to identify and fill key knowledge gaps with field studies and a rigorous scientific review is expected during the permitting and registration process.

The implementation of landscape-level mosquito control represents an exciting and innovative approach to the conservation of native Hawaiian birds. There is an understanding for the inherent need and benefit for advancing these techniques in a transparent way that includes a strong element of community engagement and outreach. Native birds and the lands that they inhabit are inextricably tied to the Hawaiian culture and the wellbeing of the people of Hawaii. This approach offers hope that future generations can enjoy the sights and sounds of Hawaii’s beautiful and unique avifauna, as we do. We welcome questions, concerns, or thoughts about this issue and IIT efforts in Hawai‘i. 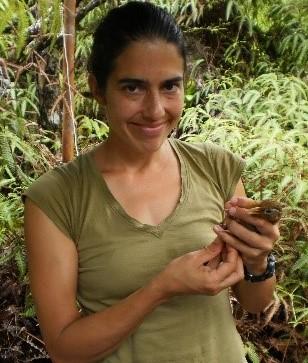 Katherine McClure is a disease ecologist with an interest in using quantitative methods to better understand and manage infectious wildlife disease. She is currently a Cornell Atkinson Center for Sustainability postdoctoral fellow at Cornell University, where she is developing models to support the effective implementation of landscape-level mosquito suppression in Hawaiian forests using Wolbachia-transinfected mosquitoes. Reach her for comment or questions at katherine.mcclure@cornell.edu.

Wildlife as a Window to Environmental Pollution in the Galápagos
The Buzz on Bee Toxicology
Learning the Importance of Veterinary Medicine and Conservation in the Republic of Congo
One Word: Nurdles
Rhinos, Buffalo and People: A One Health Issue in Indonesia
END_OF_DOCUMENT_TOKEN_TO_BE_REPLACED