Working to understand and mitigate a new threat to tiger conservation

Canine distemper virus (CDV) has a near global distribution, with infections causing high mortality in domestic dogs and many species of wild carnivores. Since 2003, a series of fatal cases have been diagnosed in Amur tigers in the Russian Far East, raising concerns of a new threat to tiger conservation. Across Asia there are now fewer than 3,500 tigers left in the wild, and the species is classified as endangered by the International Union for the Conservation of Nature. Combined threats of habitat destruction and hunting of tigers and their prey have driven the species back to just 7% of its former range, with breeding populations now lost from five of the 13 countries where tigers occurred a decade ago. These smaller and increasingly isolated populations are less able to withstand outbreaks of diseases like distemper. Our population viability analyses having estimated that a population of 25 tigers is 65% more likely to decline to extinction in the next 50 years in the presence of CDV. We are working with partners across the tiger’s range to understand the threat that CDV represents for tigers in diverse ecosystems, and to gain the epidemiological understanding required to design proportional and locally appropriate management strategies.

With fewer than 3,500 individuals remaining, the tiger is the most endangered of the world’s big cats.

Tigers are thought to contract CDV through direct contact with infected animals, such as when eating other carnivores or during infrequent contact with other tigers. The virus initially causes respiratory and gastrointestinal disease, but can progress to infect the central nervous system leading to behavioral signs, such as loss of fear and a lack of normal aggressive responses. Neurological cases in wild tigers are invariably fatal. Infections with CDV are short lasting, and animals either die or recover and develop an immunity that can last for the remainder of their lives. Because of this, rare species like tigers are unable to maintain infections on their own, with virus spilling into the tiger population from more abundant susceptible hosts like domestic dogs or more common species of wild carnivores that comprise a permanent reservoir of infection.

At the present time, CDV has only been documented in wild tiger populations in Russia. However, anecdotally tigers have been reported showing signs of infection in several other range countries including India, Indonesia, Malaysia and Thailand. We are now working to investigate CDV in tiger populations in the ways described below.

We are working with partners in Thailand, Indonesia, India, Nepal and Bhutan to introduce laboratory techniques to enable us to determine whether CDV is a threat to tigers in these countries as well. This includes the development of ‘best practices’ designed to optimize opportunities to collect diagnostic samples and health data whenever live or dead tigers are handled as part of routine management or research.

Across their range, tigers occupy vastly different ecosystems, from snow-bound taiga forests in Russia to the lush rainforests of Indonesia. Unsurprisingly, the ecology of tigers in each of these areas can vary dramatically, as can the suite of CDV-susceptible species they share habitat with. All of this can influence how CDV circulates in the environment and potentially also the risk that it poses for wild tiger populations. Where our investigations confirm that tigers are exposed to CDV, we undertake more detailed research to assess the threat that CDV represents for local tiger populations and determine how the virus circulates in the ecosystem. This includes the development of population viability models and field research to assess the relative potential contributions of domestic dogs and wild carnivores to the CDV reservoir.

In situations where CDV represents a significant threat to a tigers, we must consider implementing control strategies to maximize chances of tiger population survival. We base our recommendations on the epidemiology of the virus in the local ecosystem, in particular the identity of the species (domestic and/or wild) that comprise(s) the CDV reservoir and thus act(s) as a source of infection for tigers. Vaccination is a vital tool for controlling CDV. In areas where domestic dogs play an important role in CDV maintenance, vaccination programs may help reduce the risks for tigers. Elsewhere, it may be necessary to consider vaccinating tigers themselves, and in these circumstances we partner with zoos and the pharmaceutical industry to identify safe and effective tiger vaccination protocols, while utilizing computer modeling to inform vaccine delivery approaches tailored to specific at-risk populations.

Tigers are not the only threatened carnivore at risk from CDV infection. Approximately 1,000 lions were estimated to have died during a 2004 outbreak in the Serengeti National Park in Tanzania. In 2018, long-held fears that a similar outbreak might occur in the only remaining population of Asiatic lions were realized when CDV sickened and killed lions in the Gir Forest in Gujarat, India. Lions and other social species like African wild dogs and Ethiopian wolves are particularly vulnerable, as distemper is a highly infectious pathogen that spreads rapidly among tight social networks. Our detailed research on tigers provides context for understanding and addressing the risk distemper poses to other threatened carnivores, and we remain actively engaged in designing strategies to mitigate the impacts of CDV.

Tiger populations have declined to the extent that we can no longer afford to ignore the potential impacts of disease on their survival. Improving our understanding of the health of wild tigers is essential to tiger conservation. 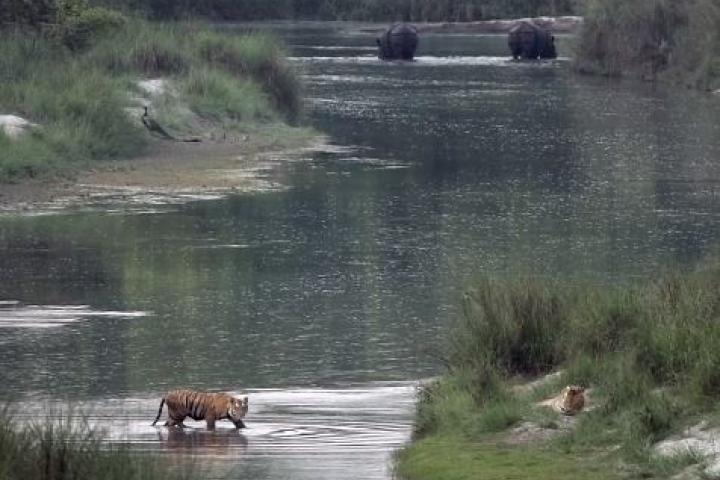 From the Field: Studying Big Cat Health in Nepal 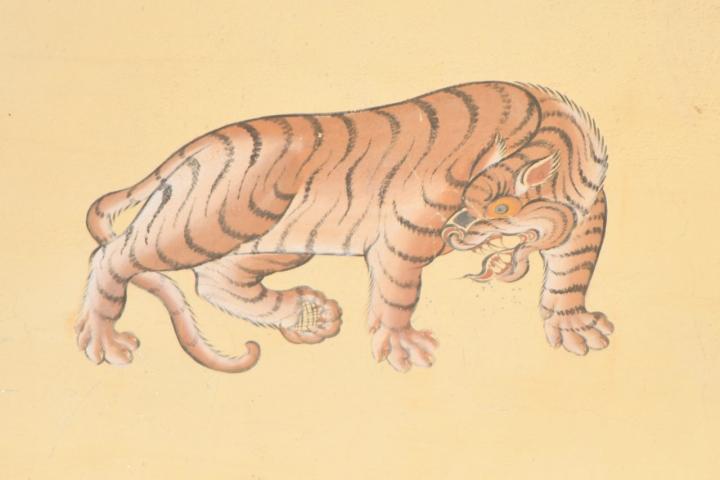 In Bhutan, a Rare Tiger’s Mysterious Illness Had a Surprising Source 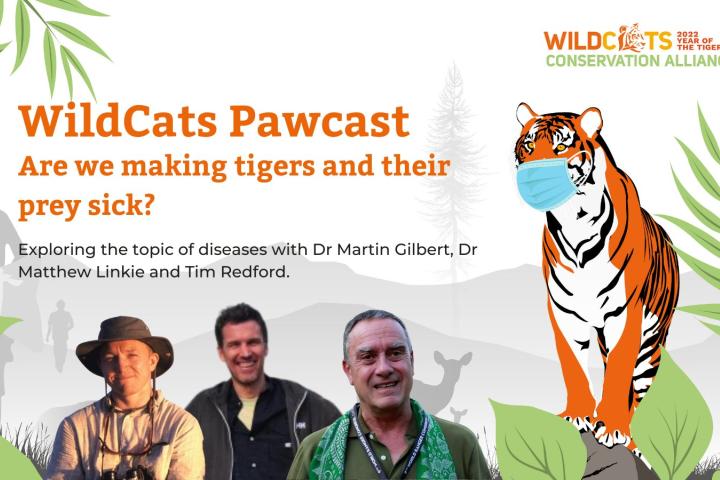 WildCats Pawcast: Are We Making Tigers and Their Prey Sick? 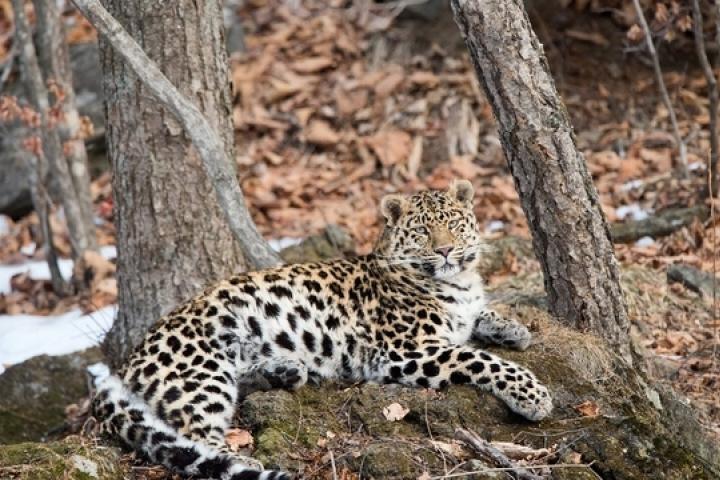 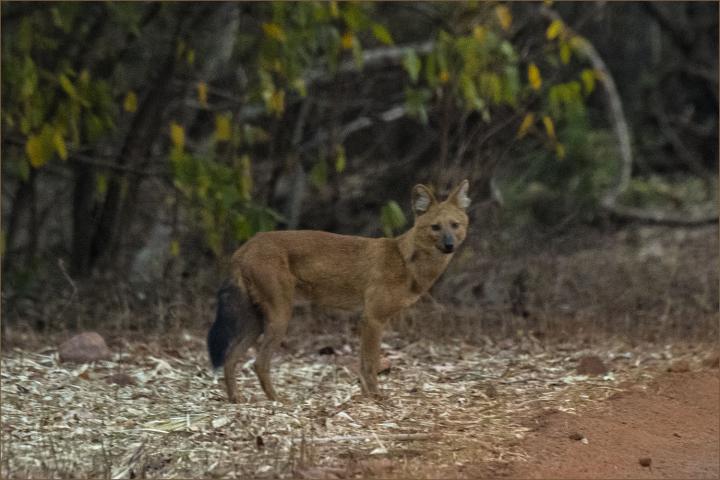 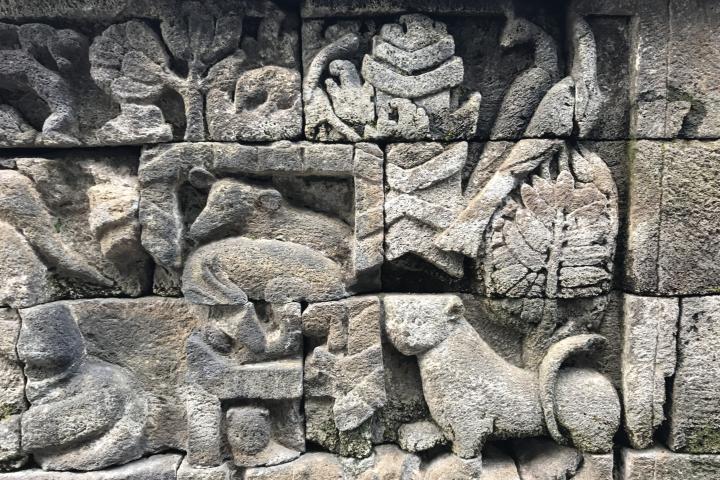 A tiger with her cubs cooling off, India. © Ronald Gilbert 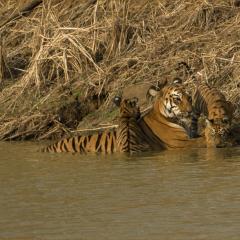 A tiger stopping for a rest, India. © Ronald Gilbert 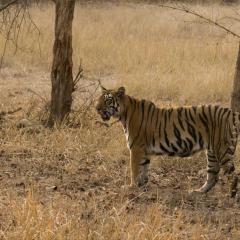 A tiger cooling off in the water, India. © Ronald Gilbert 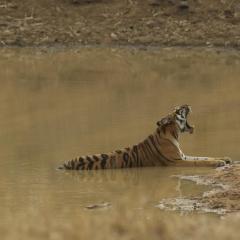 A tiger and her cubs drinking water along the river, India. © Ronald Gilbert 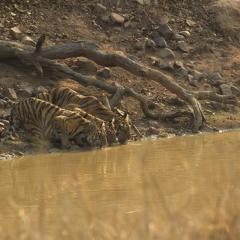 A tiger resting by the water with her cub, India. © Ronald Gilbert 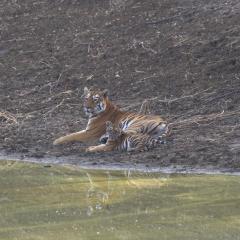 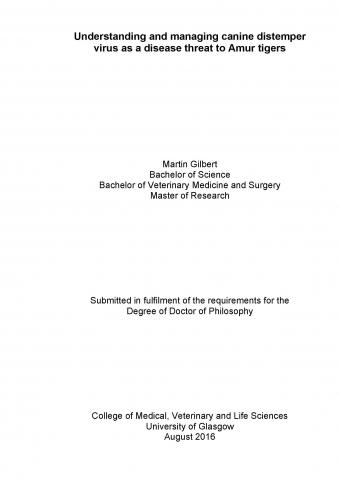 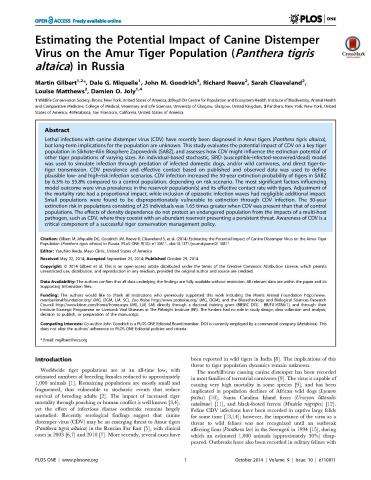 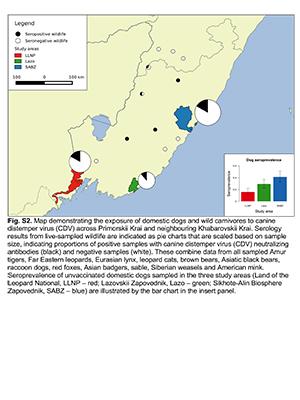 Distemper, Extinction, and Vaccination of the Amur Tiger 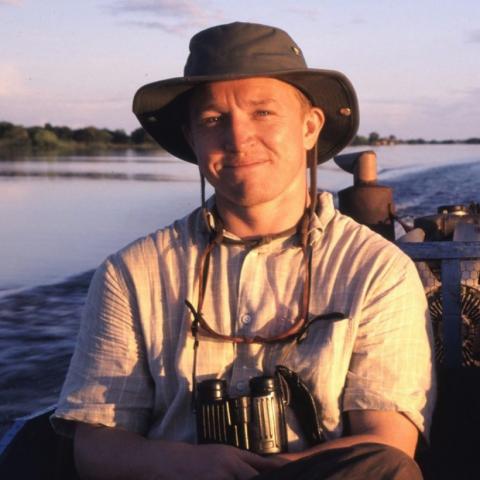 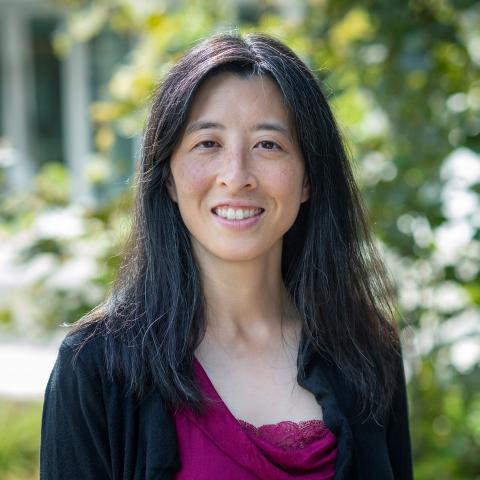 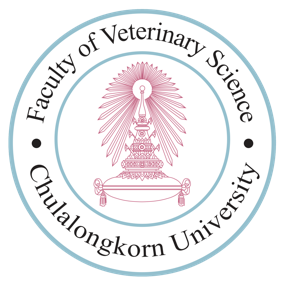 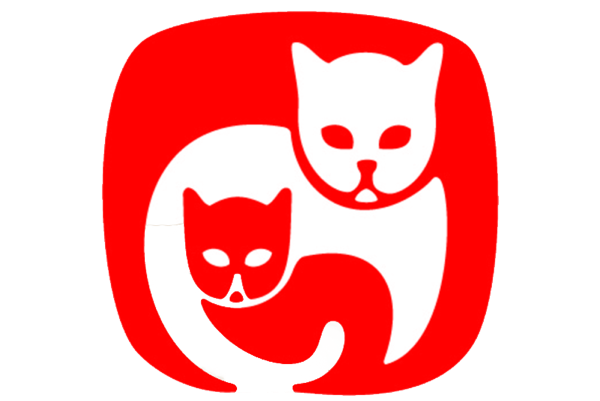 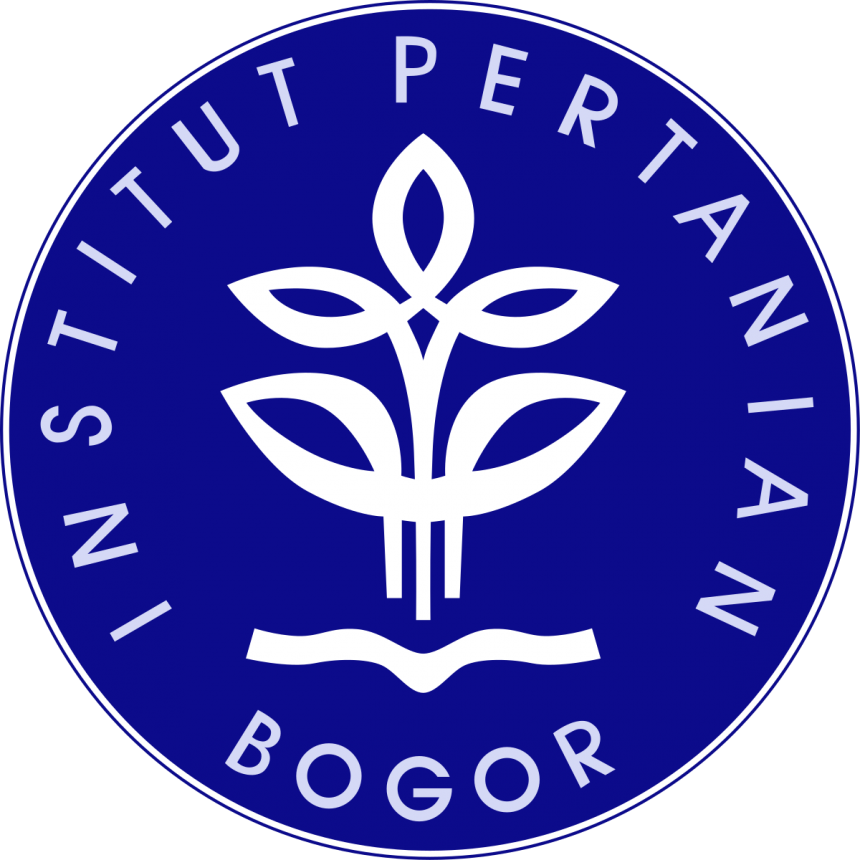 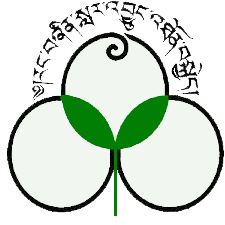 Ministry of Agriculture and Forestry, Bhutan 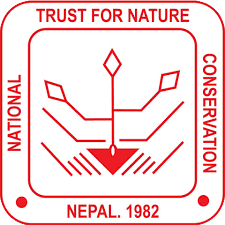