For Dr. Zachary Dvornicky-Raymond, a career in conservation may have been an inevitability. An animal lover for as long as he can remember, Dr. Dvornicky-Raymond recalls watching the Discovery Channel and Animal Planet as a child and idolizing Steve Irwin. “As I grew up and was attending zoos and learning more about the world, I came to realize that all of the animals that I loved and was so interested in were disappearing. So I always knew I wanted to figure out a way to help them.”

While he was certain he wanted to work in wildlife conservation as a child, he wasn’t sure how. Dr. Dvornicky-Raymond notes that he always loved the sciences, especially biology, growing up. He then decided to go to college to pursue a major in biology, knowing that he would someday apply it to conservation. Through some formative experiences during his time as a Cornell undergraduate, including a heartfelt discussion with Cornell zoological veterinarian Dr. Noha Abou-Madi when he was a zookeeper intern, he learned that he could merge two major interests: medicine and conservation. His hard work paid off when he got a phone call one wintry morning from Cornell's Dr. Beth Bunting — he had been offered a spot in the Cornell University College of Veterinary Medicine Class of 2019. To him, this was a dream come true; he accepted. 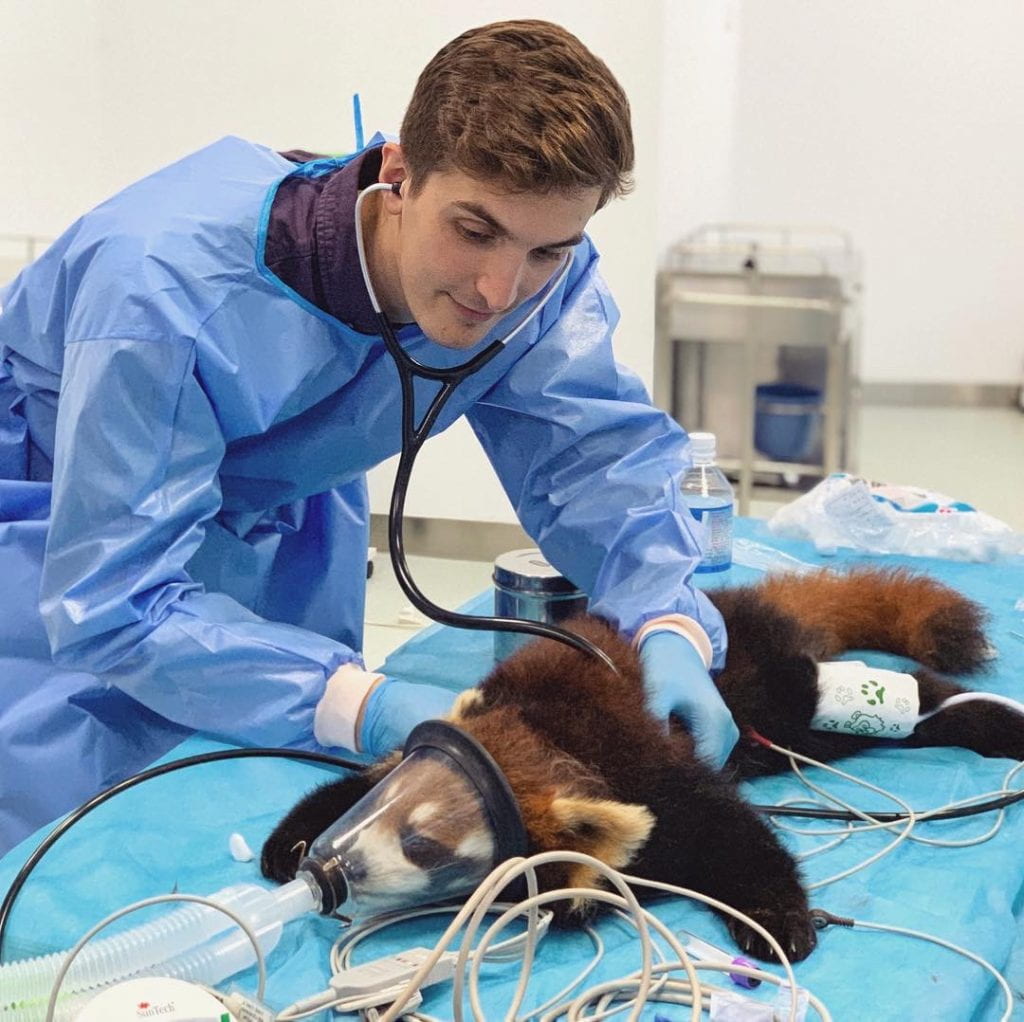 "The current state of the world calls for novel solutions to problems. Don’t feel like you have to go all-or-nothing, as long as you’re doing something. If you care about it, find some way to get involved."

Dr. Dvornicky-Raymond is particularly grateful for the opportunity he had to develop his interests during his eight years at Cornell. In vet school, some of his favorite courses included Conservation Medicine, Captive Wildlife Management, and a wide range of large animal and production courses. He calls these domestic animal courses “just as important for your development as a zoological veterinarian” as more overtly zoo-related courses. Dr. Dvornicky-Raymond served as Vice President of the Zoo and Wildlife Society, during which time he co-developed the WildLIFE Blog. He was also Vice President of the Theriogenology Club during his time as a student and took on opportunities to continue developing his research skills, including an Expanding Horizons project in Namibia working with the Cheetah Conservation Fund. “We’re sitting on a gold mine at Cornell,” he says of the Expanding Horizons Program. “The opportunity to go abroad as a vet student and have agency in a project and work on something completely novel to you is an experience that is completely worth it, whether or not you want to work abroad.” 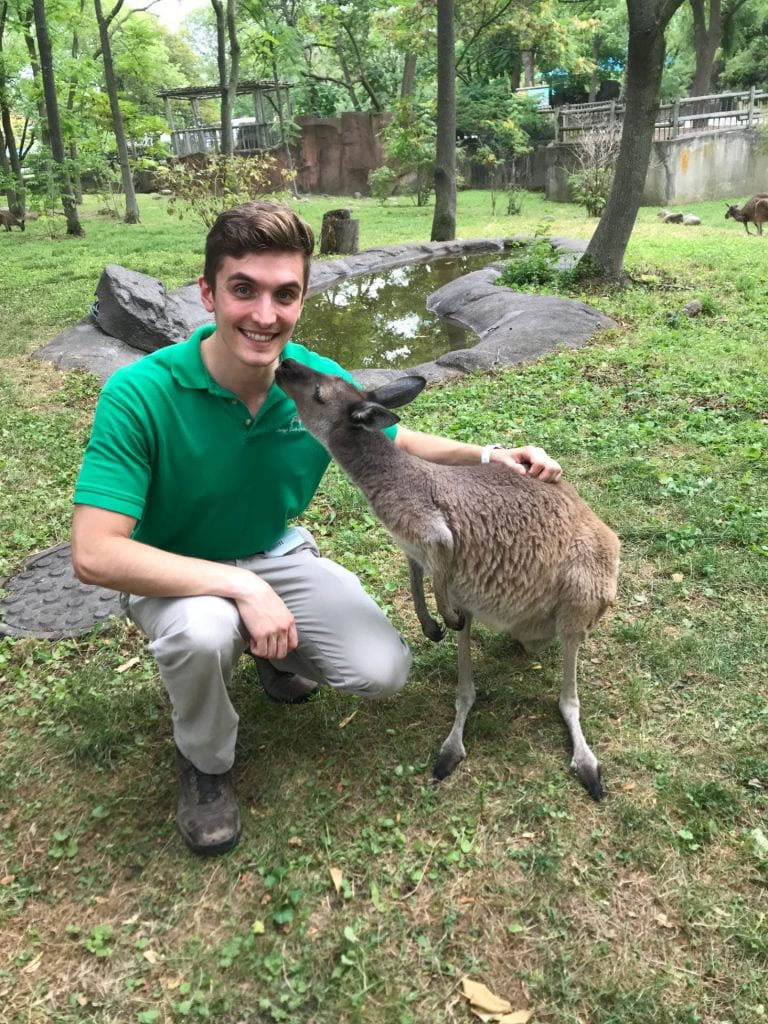 Zoo/wildlife-related experiences aside, Dr. Dvornicky-Raymond also emphasizes “leaning into things that aren’t necessarily just of professional interest, but that also speak to the heart.” This spirit of exploration should also, in his opinion, inform externship decisions. “Do something that you definitely want to do and do something somewhat related to it that you’re not sure about.” For Dr. Dvornicky-Raymond, this included an externship at a traditional zoological institution, the Brookfield Zoo, and a preceptorship at White Oak Conservation Center.

Through these experiences, Dr. Dvornicky-Raymond came to love population medicine and the semi-free ranging wildlife model. Faculty also play an integral role in the self-discovery process. “Ultimately people are faculty at Cornell for a reason. They want to be there and they deserve to be there. You know they worked hard to get there and they want to help. They want to nurture.” Faculty at Cornell played an integral role in helping him choose his next steps after receiving his DVM. 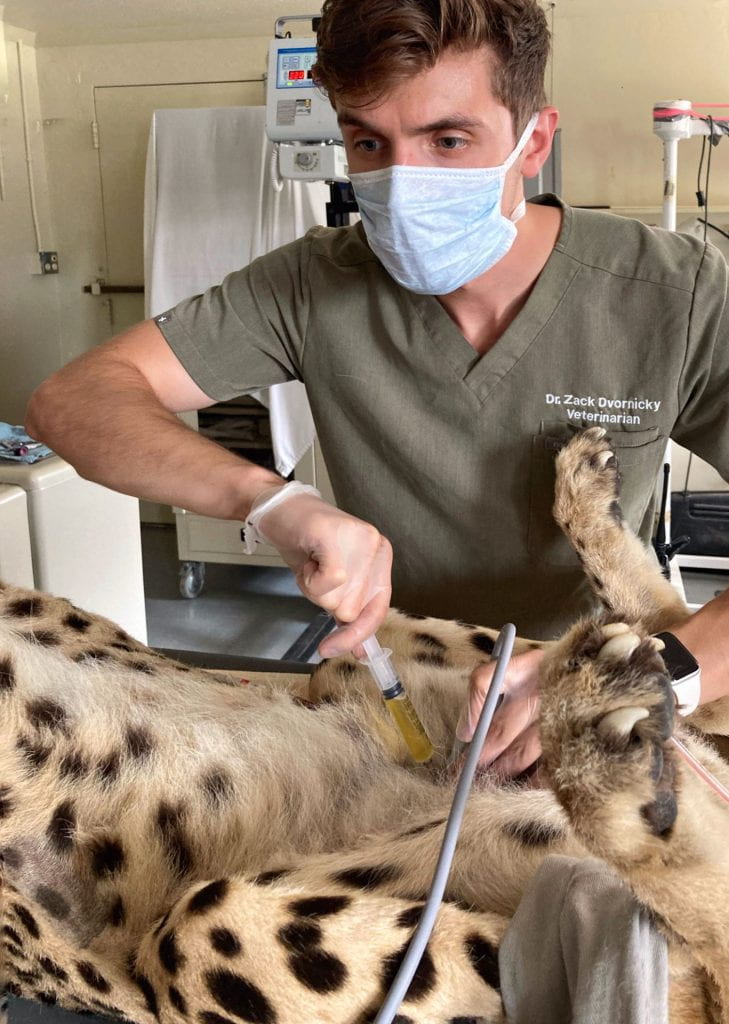 After graduation, Dr. Dvornicky-Raymond completed a small animal rotating internship at VCA West Los Angeles to “gain confidence and competence in my clinical skills.” He is quick to emphasize the many potential pathways to a career in conservation medicine, including internships in large animal and equine medicine. After completing his first internship, Dr. Dvornicky-Raymond went on to Colorado State University to complete a zoological medicine and surgery specialty internship, all while the pandemic was turning the veterinary community and the world at large upside down. “Learning how to extrapolate information and learning how to work in completely novel scenarios were the biggest things that I took away from that.”

From there, Dr. Dvornicky-Raymond felt called to return to his love for population-based medicine and found Fossil Rim Wildlife Center to be the ideal next destination. His current role as the David E. Wildlt Fellow in Zoological Medicine there gives him an abundance of opportunities. “This place is amazing, and being able to take all of that medicine that I learned in the past two years and now apply it in a different setting with new challenges is really personally fulfilling. And I’m starting to get a better appreciation for what it means to be a veterinarian as it relates to conservation, which is really cool.” 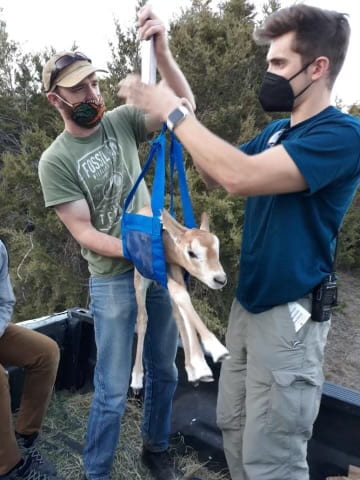 Dr. Dvornicky-Raymond is still charting the course he wants to follow when his time at Fossil Rim ends, but for him the uncertain, ever-evolving nature of conservation is part of what makes the work so special. While he is partial to umbrella and keystone species and is particularly drawn to his favorite animal, the tiger, he is thrilled by the countless ways to help save wild places and species.

“There is so much to understand, to learn, and to try. I have the veterinary medicine part down, but that is not the end-all-be-all when it comes to saving animals. Conservation is about people. And so that’s the aspect of One Health that I haven’t spent as much time with. I’ve got a pretty good handle on one-third of it, but there’s two-thirds left and I want to be able to work with a transdisciplinary team and continue to grow. I don’t know where I’m going to be in a year and that makes me nervous, but I know where I want to be. And as long as I keep my eye on the North Star, I think it will be okay. This world is changing very rapidly and people are starting to pay attention to One Health and the health of our ecosystems, so I’m hopeful that that translates into a need. You can only remain hopeful, and I encourage you to stay hopeful.”

While the years since his graduation have been action-packed, it wasn’t long ago that Dr. Dvornicky-Raymond was a student, and he is eager to share his advice for current vet students. 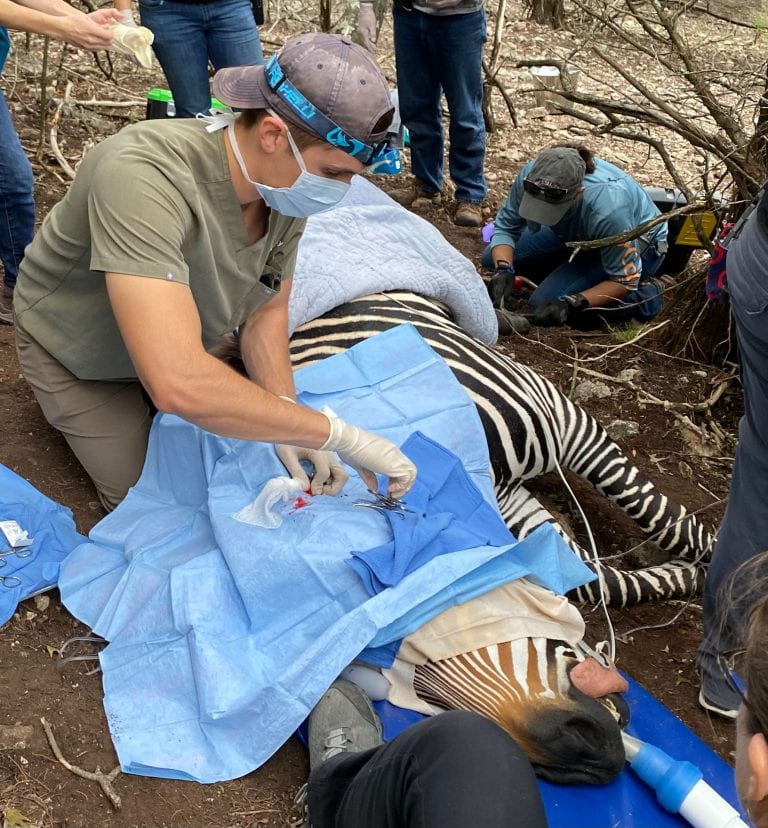 First, keep an open mind. “Being a traditional zoo vet is one pathway. But there are so many different ways that you can have an impact on the natural world and on wildlife conservation beyond being a zoo vet. So do not be discouraged by people who say there are no jobs in zoological medicine. Those people have a narrow perspective. They’re not thinking big enough.” The current state of the world, he says, calls for novel solutions to problems, and he believes that there is a place for everyone and their unique talents in this sphere. “Don’t feel like you have to go all-or-nothing, as long as you’re doing something. If you care about it, find some way to get involved.”

For his parting advice, he’s willing to veer into sentimental territory. “Follow your heart. I know I sound like a Disney character. You’re going to hear a lot of naysayers and you’re going to encounter a lot of challenges, but remember that at the end of these challenges is a life of whatever you choose to do. And you have to make sure that you are fulfilled in doing that. There are ways that each person is different that will guide you to where you’re supposed to be. So follow your heart and don’t let people tell you what to do.”

All images provided by Zachary Dvornicky-Raymond.

This article was originally published on the Cornell veterinary student-run WildLIFE blog.